Furthering to our efforts of writing tests; organizing a few sessions [http://sumantrom.blogspot.in/2016/03/getting-started-with-fedora-qa-series-1.html] where one can learn about testing and we can do things together etc. All this while, it has been fun - I’ve met new people, learned things and also realized that sharing even small pieces of knowledge and experiences makes it easier for newcomers to feel welcome.


So, at one point when Fedora 24 was released, it was exciting as we were closely involved with Fedora Release validation testing [https://fedoramagazine.org/release-validation-testing-fedora/]and so wanted to put together a release party. All open source projects encourage their communities to celebrate software release and similar milestones. Ours was a simple plan - we were having a really good time learning together and we wanted to get more people to know that there is a better way to gain knowledge - by sharing and working together.


We put together a page on the Fedora wiki[https://fedoraproject.org/wiki/Release_Party_F24_Bangalore_India] and asked locals (at Bangalore) to join in [https://lists.fedoraproject.org/archives/list/india@lists.fedoraproject.org/message/7VK5TK6GOPJXIDSIRZPY5VGNMYDX7JV5/] . We wanted to show how versatile Fedora is - talk a bit about the new features in Cloud, Workstation, Server and Spins. Also, we had a small session put together to help those interested take the first couple of steps in becoming a contributor.


On Sunday, we were happy to see that around 50 individuals wanted to spend a bit of their weekend sharing our joys, our efforts and wanting to know how to become part of The Fedora Project. Got help from some of Red Hat employees and together we worked through the logistics of organizing a party.

We started off at 1130 with celebrations and ice-breakers. A release party has a cake and we started off with cake. That said, we introduced The Fedora Project, talked about the values and also how various projects within Fedora provide opportunities to tinker with innovative ideas.


The audience was a mix of those who were learning about Fedora and others who have been participating in the project for some time. Along with the small demos for robotics and such, it was good to see that the traditional perception around “Fedora is a Linux Operating System” was addressed.


The post lunch (“pizza” - yay!) sessions included an bit of Linux history by Sachidananda. And then others came over to share how working and collaborating helped them gain confidence as well as enabled them to take on new and often complex challenges. Suraj (Deshmukh) talked about his participation in upstream projects via the Durgapur LUG(DGPLUG) and emphasized on using IRC like communication to seek solutions to vexing problems. Richa shared her journey with Wikimedia Foundation and how the Outreachy program helped her improve programming skills.


We had planned for some lab sessions - a hands-on for those, around 25 of them, interested to take their first steps in being a Fedora contributor. Machines were set up with Fedora 24 and we tested updates as well as some bits of Fedora 25 (Rawhide). Explaining the nature of Rawhide or, a continuously evolving release was fun too. At the end of the day we have around 70 updates tested and recorded. Some of the participants shared feedback and I’ll link to them in a later post.

Looking at the enthusiastic response to testing (and breaking things ;)) we will be putting together some follow-up meetings - just getting together, having fun and learning by doing things in testing. That would be a good way to understand the workings of various projects and how they interact with Fedora. Hopefully, a few contributors would also find it interesting to contribute to documentation - a lot of projects can help on-board new contributors if structured documentation and sequence of things were available.

I had fun. Arvind tells me that it was a good thing for him too and others present at the party had similar things to say. So, job not done yet, I guess ;) - the next step is to continue to have a calendar of small events where we do things and help make Fedora better.

Popular posts from this blog

By sumantro - August 03, 2017
The votes are in! The next Fedora QA Onboarding Call is on 2017-08-07 at 1330UTC -1430 UTC over blue jeans, while Fedora 27 is having couple of major changes underway , this is good time to get started. In this call we will be talking about how you as a contributor can get started with Fedora QA. The agenda can be found on this etherpad . Hope to see you all!
Read more

By sumantro - May 14, 2018
Furthering on the community efforts, a bunch of Fedora Contributors and Users in Bangalore decided to celebrate the Fedora 28 Release. This post will be talking about, how we celebrated it and the vent highlights. To start with, I would like to thank Bex for sending the swags and all who contributed to the release and made it successful. It was 2018-05-11, a Friday, clearly a start of the weekend when everybody in the office are chilled-out state of mind. We kicked off the release party with Vipul Siddharth speaking on Fedora 28 New Features. @SiddharthVipul speaking why Fedora is important and what's new in F28 pic.twitter.com/lwbkXYDSbf — sumantro (@6r11c3) May 11, 2018 Next we had Sinny Kumari talking about Atomic and new features in Fedora Atomic. @ksinny talks about @projectatomic at Fedora 28 Release Party pic.twitter.com/0ooHKhY3KC — sumantro (@6r11c3) May 11, 2018 Next we Kanika & Bhumika spoke about GSoC and Outreachy! How to get involved as a studen
Read more 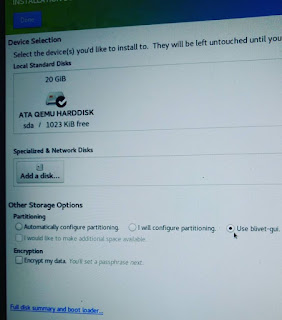 Thursday 2017-04-06 will be Anaconda Blivet-GUI Test Day ! As part of this planned Change for Fedora 26, So this is an important Test Day! We'll be testing the new detailed bottom-up configuration screen has been long requested by users and inclusion of blivet-gui into Anaconda finally makes this a reality. On the other hand, it just adds a new option without changing the existing advanced storage configuration so users that prefer the top-down configuration can still use it. to see whether it's working well enough and catch any remaining issues. It's also pretty easy to join in: all you'll need is alpha 1.7 (which you can grab from the wiki page). Anaconda grew a rather important new option in F26: as well as the two existing partitioning choices (automatic, and the existing anaconda custom part interface) there's now a *third* choice.so now you can do custom partitioning with blivet-gui run within anaconda, as well as using anaconda's own interface
Read more